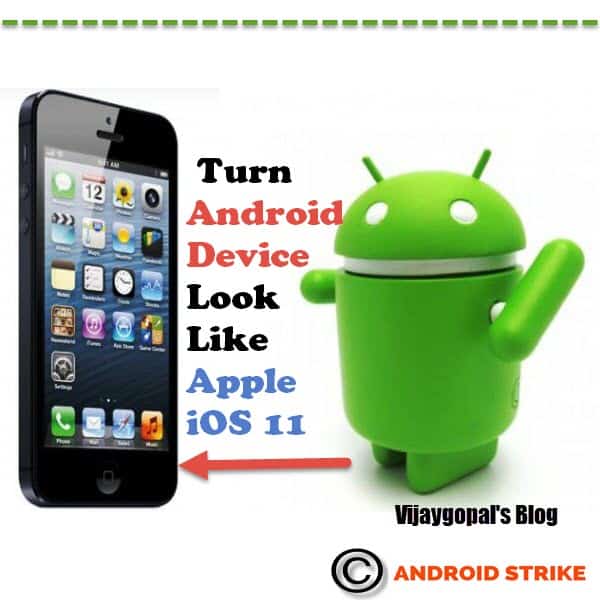 Are you feeling sad for not holding an iPhone or iPad with you? Yes, The reason behind this problem is Money. Every Apple Product 3 times cost more than an ordinary product. We People don’t have enough bucks to buy an iPhone. So, we wish to choose budget Android Phone, right? Still, We want to make our Android Phone look like Apple UI. Then, I thought of writing this article to help users to turn Android device look like ios 11

iOS 11 Recently announced at WWDC 2017. There are a lot of updates in Design and new improvements in Siri to make it better than before. iOS 11 Beta Version is released to the public, and the official update will be on later this year end. Learn How to Install iOS 11 on iPhone, iPad, and iPod right now

Android is the best Mobile OS for custom Customization of themes and also helps in Installing Custom ROMs. But, These custom features will not be alive on Apple iOS. So, In This Guide, I am going to Guide How to Convert Any Android Phone like iPhone iOS 11.  Also, Check Best Launcher for Android 2017 to make your Android phone more Beautiful

Downloading and Installing a custom launcher will help you to make the Android device looks like iOS 11. So, The big benefit of installing launcher is, You don’t need any other ROM which Exactly looks like Apple iOS and Installation made easy. So, Before going to the Instruction Part. Make sure; You don’t have Android version less than 4.0

How To Turn Android Device Look Like iOS 11 (Apple): –

I think you’re damn excited to Install the launcher on your phone to make your phone like Apple iPhone. To do so, you have to follow some below given step-by-step guide

How To Download and Install iOS 11 on Your Android Device: –

I Hope you loved reading the guide on How To Make Android Device look like iOS 11. To Make it helpful to others. Share the link with your friends and Comment below. If you want to say anything to me or any Problem with Installation. Keep visiting for More daily tech updates and Subscribe me with your Email in the below section.