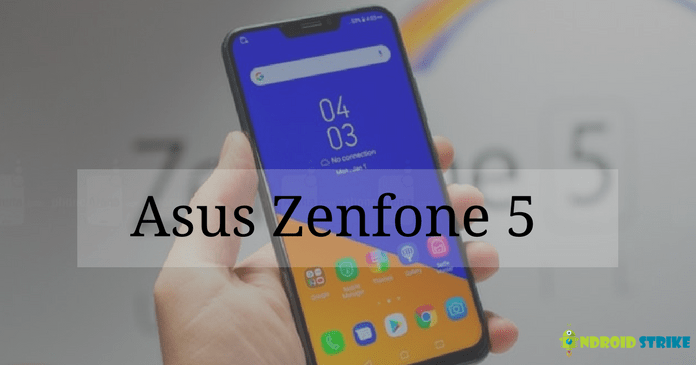 After the massive release of Asus Zenfone 4, Asus decided to launch its new Zenfone series as Zenfone 5, or we call it as the successor of Zenfone 4. We have never imagined that Asus will take a huge step in its design, UI, and camera. Similar to the iPhone X, Asus also designed and launched it’s new Zenfone series 5 with the notch bezel-less display which is trending in the present era. So, Are you so eager to know more about the Asus Zenfone 5? Then, take a look at the next part

Well, Coming to the point. The brand New Asus Zenfone 5 looks similar the iPhone X in the view of design and implementation of the camera at the back side. Also, It has the fingerprint sensor in the middle (backside) of the phone which enhances the design little more. Below, the fingerprint sensor, The Asus logo is printed on it. We can say that the complete design has been copied from iPhone X and refurbished as Asus Zenfone 5 which is the Android smartphone.

Asus has announced that this smartphone will be available globally. As of now, We can expect that the release will happen in between 2-3 months of time from now.

We already knew that Zenfone 5 has a bezel-less display and we have covered quick specifications in order to give you a quick look at the entire phone in less time. Here, we will discuss the complete in-depth review of the brand new Asus Zenfone 5 with the pricing and overall verdict at the final. The whole attraction of the phone has occurred over the screen. Maybe, we have not impressed unless the Zenfone 5 does not has bezel-less notch display. But, We have to trust. Because the Company has taken a good step at the right time, Who doesn’t like bezel-less display? Apart from 15% of the 100, Everyone is the massive fan of bezel-less edge screen after the release of iPhone X.

The new Asus Zenfone 5 has 6.2 inch IPS LCD Display with 1080 x 2246 pixels (Full HD). Similar to the iPhone X, It has the notch at the top of the display where it covers the camera and few other sensors over it which we can say it as stunning tech running in the smartphone market.

The rear is the complete glass and metal mixed surface. In the initial look itself, The rear design has been rated as 4.1/5. In the middle of the back panel, the fingerprint sensor is insisted. It looks pretty decent when it comes premium design all over the device. The primary camera has two lenses which are implemented vertically like the iPhone X or 10. below the lenses we will get a flashlight.

We have only covered the outer part of the Zenfone. Now, let’s discuss the internal specs like Processor, RAM, and Storage. The Asus Zenfone 5 has two variants, one is 64GB of Storage with 4GB of RAM, and another is 128GB Storage with 6GB of RAM.

Moving into the Processor, It holds Qualcomm Snapdragon 636 Chipset with Octa-Core processor which is the AI chipset where you can expect more powerful intelligence than the other smartphone regarding performance and camera. Based on the recent analysis, We can expect more than our creativity.

It is running on the latest version of Android (i.e., Android Oreo). Also, The Zenfone 5 has the bigger brother called Zenfone 5z, Which is similar in design and different in specifications and hardware. The Asus Zenfone 5Z holds 8GB of RAM and 256GB of Internal storage with the latest Qualcomm Snapdragon 845 chipsets which are currently being used in high-end devices like Samsung Galaxy S9/S9+. As per our expectation, Asus has given the Powerful Sony lens on the primary Camera which it holds 12MP and 8MP of additional wide angle lens which is capable of taking landscape images of friends and family in a vast manner. Apart from that, the primary first lens has f/1.8 aperture and the second one supports up to 120 degrees during shots.

As we knew that, The Snapdragon 636 chipset has AI configured So while taking photos with Zenfone 5, We can notice that AI helps the phone to take a more precise, smarter picture at indoor or outdoor conditions and focusing on the object has gone crazy as it focuses without the help of the user.

Also, This smartphone has Secondary 8MP selfie-shooter with f/2.0 aperture. As like Huawei mate series 10. The software AI helps the camera to take crispy selfies than the normal one. This phone also has a portrait mode, automatic mode and so on. The more benefitted feature in this device is, Unlocking device with the help of face recognition. Like iPhone X and One Plus 5T, The Asus Zenfone 5 also supports facial recognition unlocking.

Asus Zenfone 5 has 3,300 mAh battery which is quite low. Once again thanks to the ‘AI Charging.’ The AI will take care of the battery savings. It will notice the charging and usage time, So, no need to worry about quick draining. In the Mobile World conference 2018, Asus has announced that AI will take care of battery and memory management based on the user scheduling. But, We can’t say that without using it at least for two months.

The Asus Zenfone 5 and 5Z has same design and camera. Apart from the hardware and chipset, everything looks to be the same. So, Do you say that is it a copy of iPhone X? If yes, do let me know in the comment section.

Coming to the pricing range, In MWC (Mobile World Conference) 2018, Asus has not discussed the price range. But, Soon we will get the full update and Pricing and inform you with our another article. Hope, You loved this article on Asus Zenfone 5 Full Review.