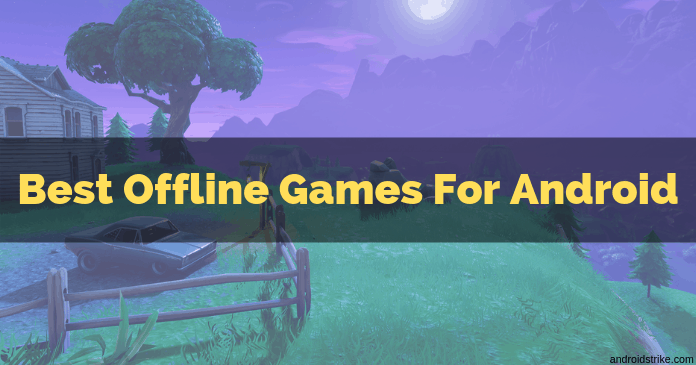 Smash it is one of the addictive games available today.  The genre of this game is the shooter. It is very stress busting experience when you shoot all the glass with metallic balls available in this game.  This game can be played without any internet connection. Sudoku is a classic entertaining game. This is a top-rated game since its release. There are various modes which can range from easy to difficult levels. This game is very engaging. This gameplay is very basic, so it is suitable for any player. Tank racers are one of the best offline games available on this list. You can defeat the enemies with the laser weapons available in this game. In every level, the player has to fire the tanks available.  You can find tons of powerups and other game resources which you can avail. Quizoid is a great game which can give work to your brain. The user can answer several interesting questions asked in this game.  You can play with the AI in this game. There are lots of game modes which you can select.  A set of 20 questions will be asked to the player.  There totally seven thousand questions available from different genres. Marble Blast is an arcade category game. The graphics and the visuals of this game are colorful and impressive. The interface of this game is very attractive. There is a huge fan base available for this game. You can also enjoy some interesting powerups available in this game at each level.

Once upon a tower Once upon a tower is a game with an interesting storyboard. It is unique from other fairy tale stories. Here the prince dies, and the princess rescues herself by fighting with the enemies with her hammer.  She keeps on digging and tries to escape underground. The princess has to fight with some miserable creatures which can climb such as spiders and monsters.  You can get many powerups while playing the game.  You may have to pass all the levels to escape from the tower. This game is not just some common endless running game.  This running game is rather relaxing and calm without any hassles. The player gets lots of freedom to perform various tasks such as jumping and backflipping. The classic proper chess game is very boring. This bad chess is an exciting game. The chess board is classic, but the coins in the game are very random.  There many queens and pawns in this unique chess game. This game is perfect for players who don’t know how to play chess. It is now not the time to hit the road but rather to hit the virtual road. Get on the motorcycle in the traffic rider and escape the traffic of the city and become the first person to finish the race. The traffic riders are the endless race games that will go faster and faster to get to the finish line, and you should be careful not to crash. However the mission mode can make it interesting than the other racers, you will race with the particular targets by zooming in. You will even choose the other modes such as trails and the endless runner feature. The major mayhem is an interesting game which belongs to the adults swims mobile games. You can play as the main character by taking on the line of bad people. The game is like a shooting gallery. The bad guys will pop up from the places they are hiding suddenly, and you have to tap on the screen to kill them. You can also throw the bombs if you want to end them for good. The bad guys will try to end you, so you have to make sure to stay alive till your end. You can get the bonuses for your play, and there are facilities such as cools kills and the spree kills. From the days of the mortal kombat and the street fighter, the one to one combat is popular.  The shadow fighter is a true warrior game where you can learn a lot of cool moves to fight. There are two action buttons pick and bunch. You can learn the combinations and then you can become a great ninja warrior. The game contains the feature of two dimension art style in the silhouettes. Kuro, the ninja, is a famous game character whom everybody loves. Nothing will stop the character from the quest to find his mentor and to deliver an important message to him. You can now transport to the world of the shadow blade where you can slice your enemies and make the journey to visit the master. The game is available for free which is quite surprising when we think of the amount of work that went into the creation of the game. The 8-pixel art style will make the game look amazing. You have to control the chicken who wants to cross the road. Then you have to avoid the cars that zoom through the roads. There will also be streams in the path, so you have to make the chicken goes safely in the grasses. You also need to move fast. You have to beat your own score every time, and that’s where the real challenge starts. Even though the game can become repetitive sometimes it will not get boring and dull. You can play the game for hours that’s its specialty.

These are some of the superb best free offline android games available for you to play. Most of these games are for free so enjoy playing these games. If you liked this list of offline mobile games, then don’t forget to share this with your friends and follow us on Facebook, Twitter and Telegram for quick updates.