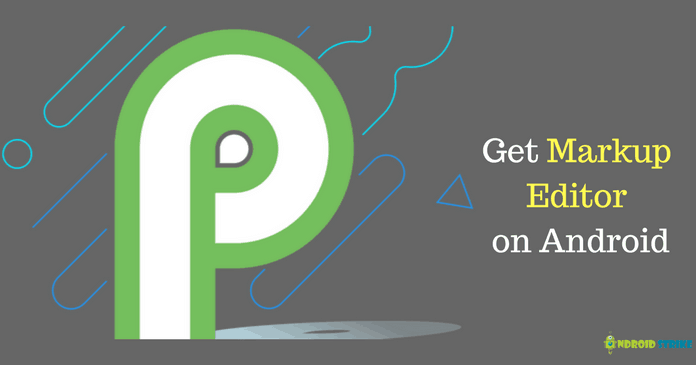 Get Android P Markup Screenshot Editor on your Android phone: –

We know that Google has released it’s first Developer Preview 1 on Wednesday, and we also discussed how to install Android P Developer Preview 1 on Pixel Devices. Android P has arrived with lots of new features and Markup is also one of the highlights which let you edit a screenshot. It can be any image; After taking a screenshot, you will get the option to edit. We can take the screenshot of any Facebook post, Whatsapp status, and Instagram stories. But, the main disadvantage is we can’t edit those screenshots.

But, It is possible if you have Android P installed on your device as it is an official stock Android P built-in feature. What if you don’t have Android P installed? Do you think it is impossible to implement this Markup feature on your current Android device? Yes? Sometimes, Impossible says I’m possible. Then, Why to worry? In this article, I will tell you the complete process to get Markup feature on your phone by installing a Markup APK file.

So, What else you can do with this Markup feature?

As we have previously discussed, Markup is the built-in feature of Android P, and with that update, you can easily edit the screenshot using the tools like eraser, crop, and marker.

Contents show
1 Features of Markup feature: –
2 Where I found this app?
3 How to Get Android P Markup Screenshot Editor: –
4 Final Verdict: –

It doesn’t matter what Android device or what Android version you are running in, You can just install the application and Start editing the screenshot on the go. If you have Google Pixel 2 device, What for you’re waiting? Go ahead and you can able to use this feature blindly after installing Android P developer Preview 1.

Where I found this app?

The complete Credits goes to one of the XDA members and the forum. Quinny899 has dropped this feature and using this you can able to use this Markup Editor Feature on Any Android device. But, the App has some problems as it still is in beta mode, The App doesn’t show Edit option after taking the screenshot. So, What you to do is, Just click on the share option and select Markup app in the Share Menu. That’s it.

How to Get Android P Markup Screenshot Editor: –

2. Now, Select the app from the download manager and Allow the Permission by enabling Unknown sources. 3. Go to Settings >> Enable Unknown Sources and continue to the next step. 6. Wait for few seconds until the app gets installed on your device and Click on Done once the app finishes its installation. 7. Now, You have successfully installed the ‘Markup‘ Editor into your device. Now, Take a screenshot and Click on the Share button and then Choose the Markup Editor app and Continue editing the image within the device itself. After selecting the app on the Share menu, The Markup Editor Interface looks like this, and you can add color, text, draw, and crop the image. I hope, this guide helped you get Android P Markup Screenshot editor. As the app is still in the developer program, you will find some bugs using it in a daily manner. I will update the post once I get the next version of Markup editor app which is for Android devices which are running below Android P. So, If you face any issues in installing and using the app please let me know in the comment section. Also, follow our site for more tutorials like this.