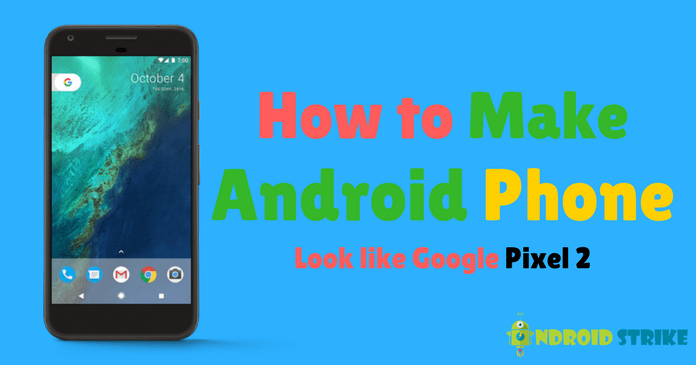 Recently, Google has unveiled their brand new Pixel 2 into the smartphone market, and it is the next version of Pixel 2016 model. As we all know, This phone came up with excellent features that can be used only in Google Pixel 2 device itself. So, What if we use those features in non-pixel devices? In this article, You are going to know about “How to turn your normal Android Phone look like Google Pixel 2“.

Also Read: – How To Make Android Phone Looks like iOS 11 Without Root

Practically speaking, I am also an Android user. But, not even touched Pixel device in my life till now. But, I have experienced the UI and functions by installing the modded Pixel Custom ROM on my phone.

If you’re also the one like me. Then, follow the guide till the end. After reading this, you will get to know what are the features that you can experience on your Android phone. So, What for you’re waiting? Let’s get started

Here are the best tips to turn your Android phone look like Pixel 2. After the massive fight, Google has changed the look of the widget on the Pixel 2 model. The new widget look is not like the previous one. It looks so clean and attractive surface over it. If you are the Lawnchair user, Then, you would get this widget update on your device soon. If not, You can download the Google Pixel launcher APK on your Phone to experience the New Notification widget.

If you are aware of Google Pixel launcher. Then, I would recommend you to go with Another Widget to get the same look on your phone. This feature can make your Android Phone look like Google Pixel 2. Portrait Mode is not the new feature. This feature is already featured on Apple devices. You might already know about this Portrait Mode if you’re an iOS or Apple user. The same thing, Google has copy-pasted in their Pixel 2 device. Previously, We all have the Camera called “Google Camera.” Due to some bugs, the app crashed itself on many Android phones.

Still, The Newer version of Google camera is Available. You can try installing it on your phone. The camera has one feature called “Blur-mode” which works similar to Portrait mode. The difference is, Apple uses dual-camera. But, this camera app works with a Single camera lens. I cannot suggest you others app. Because no other app can bring the uniqueness like Google Camera. One of the best looks for the Pixel phone is “Rounded Corners.” The screen will be in the form of curve edges which looks similar to the Samsung Galaxy S7 edge that gives you the premium design feel to your Android Phone. Don’t worry if you don’t have Pixel in your hand. You can also make your screen with Rounded Corners through installing one small application, and it works without rooting your device.

CornerFly is one of the best application which you can quickly get it from the play store or Android market. I have been using this application for several months. Installing this app on your device, enables you to enjoy the Rounded Corner. Face Retouching is also an inbuilt feature which is coming with the Google Pixel 2. To use this application, you need pixel 2 device or else. You can simply use Google Camera. This Feature only retouches your face. In case, you have acne, black spots or some other rashes in your skin. This feature will recognize it and retouch your look to provide a spotless image (means clear skin).

This feature is not at all a new one. Almost, Every camera application available in the Play store has beauty mode enabled. If you don’t like Google camera, I hardly recommend you to use the best alternative Snapseed. Snapseed is the another best app which is equal to the Google camera which can be used for Face Retouching on your device. For the small change, The Search bar from the top shifted to the dock in the Pixel 2 device. If you also need to change your search bar and change the look of your device like Google Pixel 2. You can give a try installing two launchers, Nova Launcher and Lawnchair which is the best-rated launchers to change the overall look of your device with one click installation.

If your device has Android Marshmallow 6.0 or above version. Then, You can quickly customize your phone to change the look like Android Oreo (8.0). So, you can be easily accessible to use all the features which came with Android Oreo. E.g., – Notification dots

Now Playing is also the premium feature which is coming with the Pixel 2/Pixel 2 XL devices. This feature will work in the background even if your phone is locked. What does it do? Now Playing feature will notify you when some music is played in the background or around you. It will hear the song and inform the user, and they can also Play the same song in their device using Spotify or other apps.

To Enable this premium feature in your smartphone. Then, You need the help of Shazam. Shazam is the favorite music app which you can get it from Android store for free of cost. Install and open the app. To Turn ON Now playing Feature. Hold the “Tap On Shazam button” for 2 seconds and click on TURN ON button.

This application will consume 36% of your battery. After enabling this Auto-shazam. You will notice the battery draining on daily usage.

Also, We have discussed How to Make your Android Phone Look Like Google Pixel 2 using Nova Launcher Live Photos – An Excellent feature from Google this time on Pixel 2 device. Apple made a trend on live photos feature with iPhone 6 and 6s Plus. Now, it’s the time for Google Pixel 2 to make it much accessible for the Android users.

So, What is Live Photo? I know, Most of them probably don’t know about this feature. Live Photos feature is the nothing but a short video of 2-3 seconds. When the user clicks on capture button, This feature will record the image for 2 seconds to make it as a quick video. You can imagine this as a GIF Image.

To Enable this feature on your Phone. You need the app called Camera MX. Just install and open the app. You will see the Live Photos option in the left side menu. Enable it and Enjoy it.

Live Wallpapers always gives a unique look for the smartphone. At the same time, It consumes a lot of battery when compared to Normal or stable wallpaper. Still, You want to Experience the Live wallpaper on your device.

Open play store and install Wallpapers by Google and Apply it on your Android phone. Or else try Pixel Wallpapers.