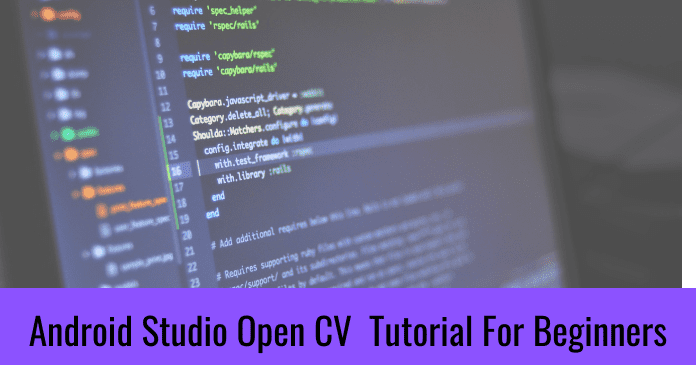 OpenCV is an open-source library for real-time image processing and computer vision. It is written in C/C++ and has interfaces for Java and Python. OpenCV is used for a variety of applications, including medical imaging, robot navigation, and object recognition. In this tutorial, we will learn how to use OpenCV for Android Studio to create an Android application with computer vision capabilities. We will create a basic application that uses the camera to capture images, detect objects in the image, and display the results. We will also cover some of the basic concepts of computer vision and image processing.

By the end of this tutorial, you will be able to create an Android application that can detect objects in an image.

What are the features of OpenCV?

OpenCV, or Open Source Computer Vision library, is an open source computer vision and machine learning software library. OpenCV was designed for computational efficiency and with a strong focus on real-time applications. OpenCV supports a wide variety of programming languages such as C++, Python, Java, etc and is available on different platforms including Windows, Linux, OS X, Android, and iOS.

OpenCV has a wide variety of features, including object detection, facial recognition, motion tracking, image processing, and more. It also has a library of optimized algorithms which can be used for various tasks such as object detection, face recognition, motion tracking and more. OpenCV also supports various camera formats, including monocular, stereo, and optical flow cameras. Additionally, OpenCV has a strong focus on real-time applications and can be used to develop applications that can process and analyze video streams.

What are the applications of OpenCV?

OpenCV is used in a wide variety of applications, from facial recognition to medical imaging. It is especially popular for its development of computer vision applications, such as face recognition, object tracking and image segmentation.

Setting up your OpenCV environment

Before you can start coding with OpenCV, you need to set up your environment. This process varies depending on your operating system and IDE.

Once you’ve configured your environment, you’re ready to start coding.

When you click the download button, you will be asked to choose your operating system. Choose the one you’re using and you will be presented with the correct version of Android Studio. After you’ve downloaded the file, open it and follow the on-screen instructions to install Android Studio.

Once you have installed Android Studio, you can open the software and create a new project. You will then be able to configure the project settings, such as the minimum Android version, the target device, etc. After you’ve completed the configuration, you can go ahead and start coding your application.

You will then need to add the OpenCV libraries to your build.gradle file. This will allow you to access the OpenCV library from within your code. After this, you will be able to start writing code that uses OpenCV.

Once you have Android Studio installed and created a new project, you will need to add the OpenCV library to your project. This is done by downloading the library from the OpenCV website, extracting the ZIP file and adding the openCV library files to the app/src/main directory of your project.

Once you have the library added to your project, you will need to configure the Android Studio project to use the OpenCV library. This is done by adding the following lines to the build.gradle file in the project directory:

OpenCV is an open source computer vision library that allows you to perform image processing on images and videos. It is used for many different applications, including facial recognition, object detection, and more.

Now that you have the basic structure of an Android Studio project set up, you can now begin to load an image. To do this, you will use the OpenCV library.

First, you need to add the OpenCV library to your project. To do this, open Android Studio and select File > New > Import Module. In the window that appears, enter the directory for the OpenCV SDK.

Once you have imported the OpenCV library, you can now begin to load an image. To do this, you will use the Imgcodecs class. This class contains functions that allow you to easily open and save images.

Once you have opened the image, you can now begin to manipulate it. There are many functions in OpenCV that allow you to easily manipulate images. In the next section, we will take a look at how to use some of these functions to create a simple image manipulation application.

Now that we’ve set up our project and configured our development environment, let’s start by displaying an image.

To do this, we need to add a new ImageView to our activity_main.xml layout. The ImageView widget is used to display images in an app.

For our example, we’ll use a simple image of a flower, which you can download here. Save the image to the res/drawable folder in your project directory.

Next, open the activity_main.xml layout file and add the following code:

This code will add the flower image to the center of our app screen. The scaleType attribute is used to control how the image is displayed within the ImageView.

Now, we need to add some code to our MainActivity.java file. Open the file and add the following code to the onCreate() method:

This will set the image resource to the flower we added to the drawable folder.

Finally, run the app to see the flower image displayed on your device.

Preprocessing an image is an important step before any type of image analysis. It includes changing the color of the image, changing the brightness, contrast, sharpness, etc.

By following this tutorial, you’ll be able to create a basic image preprocessing program in Android Studio using OpenCV.

In this part of the tutorial, we will learn how to detect edges in images. This is an important step in image processing, as it enables us to identify the boundaries of objects or regions.

First, we need to create a new project in Android Studio. Then, we will add the OpenCV library to our project. Next, we will create an ImageView in the layout of our activity. After that, we will write code to detect edges in the image and display the result in the ImageView.

Finally, we will display the result in the ImageView. The result will be a black and white image with the edges highlighted in white.

Now that your project is set up, let’s start by detecting corners. To do this, go to the OpenCV library (inside the OpenCV folder of the project) and look for the feature.hpp file. This file contains the code for corner detection. To detect corners, you need to call the function cv::findChessboardCorners. This function takes two parameters: the image and the number of corners.

Once you’ve called the function, you can draw the corners on the image. To do this, use the cv::drawChessboardCorners function. This function takes three parameters: the image, the number of corners, and the corners that were found.

Now that the corners have been detected, you can start processing the image. You can use the cv::goodFeaturesToTrack function to detect features in the image. This function takes two parameters: the image and the number of features to be detected.

Once the features have been detected, you can draw them on the image. To do this, use the cv::drawKeyPoints function. This function takes three parameters: the image, the features, and the color of the features.

Once we have our image loaded as a Mat object and grayscale, we can begin to detect lines. This is done with the HoughLinesP method. This method takes in two argument, the first is the output of the Canny Edge detector and the second is the accumulator threshold value. The accumulator threshold value will define how precise the lines are detected.

We can define our parameters as follows:

This will return an array of lines that have been detected in the image. We can then draw these lines on our image using the following code:

This code will draw the lines on the image using the coordinates of the start and end points of the lines that were detected.

The first step to detecting shapes is to help OpenCV understand the image we’re working with. To do that, we can apply a few filters to the image to make its shape easier to detect. We can use a Gaussian blur filter to reduce the noise in the image. This is done by creating a Gaussian kernel, which is a matrix of odd-number dimensions and a certain standard deviation.

We’ve gone through the process of installing and setting up OpenCV for Android using Android Studio. We’ve also gone through the basics of capturing frames from the camera, converting them to grayscale and applying some thresholding.

In this tutorial, you learned how to create an Android application that uses OpenCV to detect and recognize faces in an image. We covered the basics of setting up the project, loading images and displaying them in the app. Finally, we used the Cascade Classifier to detect the faces in the image.