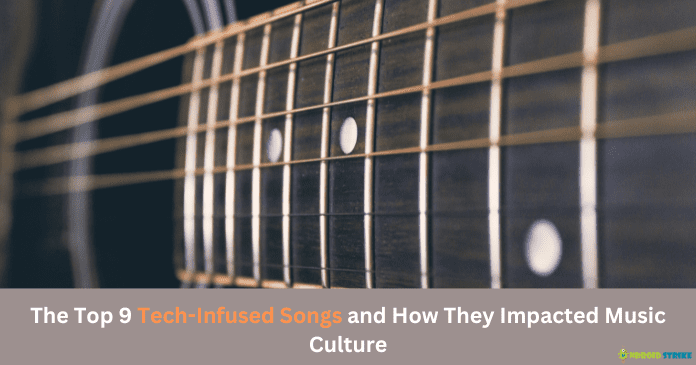 Music and technology have always been intertwined. Technology has enabled a new generation of music creators to explore and expand the possibilities of what is possible in the genre. From auto-tune to sampling, technology has revolutionized how music is produced and consumed. Some songs have become landmark moments in music history, leaving an indelible mark on our culture. Here are nine of the top tech-infused songs and how they impacted music culture.

1. Daft Punk – Around The World

Daft Punk is undoubtedly one of the most influential electronic music acts of all time. In 1997, they changed the face of electronic music with their single “Around The World”. The success of this track was largely due to its use of a synthesized robotic vocal, which was made possible by the use of vocoders. This style has become an integral part of the modern electronic music landscape, paving the way for artists such as Skrillex and Deadmau5.

Nelly’s “Hot In Herre” marked the rise of the “Dirty South” sound in the early 2000s. The song made use of the Roland TR-808 drum machine, an electronic instrument that changed the way hip-hop and rap music was made. The track was notable for its heavy use of the drum machine, which created a sound that was unique and unlike any hip-hop or rap song before it.

Eminem’s “My Name Is” is one of the most iconic rap songs ever released. The song marked Eminem’s breakthrough into mainstream success and it was made possible by the use of technology. Eminem was one of the first rappers to make heavy use of vocal manipulation software. He used this technology to create a distinct sound that soon became his signature style.

Britney Spears is one of the most iconic pop stars of all time. Her first single, …Baby One More Time, was a breaking point in music culture. The track was made possible by two pieces of technology. First, Britney used Auto-Tune software to create an artificial vocal effect. Additionally, she used a drum machine to create the track’s distinctive rhythm. Together, these two pieces of technology helped to make the song a massive success.

Kanye West has become one of the most influential musical figures of the past decade. His massive success can be partly attributed to his innovative use of technology. His 2007 single “Stronger”, for example, featured sped-up vocal samples from the late Daft Punk track “Harder, Better, Faster, Stronger”. By sampling this, Kanye created a unique sound that was unlike anything that had been heard before.

6. David Guetta – When Love Takes Over

David Guetta is one of the most successful and influential producers in the modern music industry. His 2009 single “When Love Takes Over” was made possible by technology and computer software. Guetta used Auto-Tune, plug-ins, and other software to create a lush, complex production that was still accessible to the public. This song set the foundation for EDM, paving the way for artists such as Avicii and Diplo.

7. Taylor Swift – Shake It Off

Taylor Swift’s 2014 single “Shake It Off” was one of the most successful songs of the decade. The track was produced by Max Martin, who used technology extensively to help create the song’s signature sound. He used a program called Melodyne to help Swift create her vocal melodies and vocal harmonies. This automated software enabled the production of the track to be much more precise and efficient.

Justin Bieber is one of the biggest pop stars in the world. His 2015 single “Sorry” is one of the singer’s most successful songs and is a testament to how technology has changed pop music. The track was produced by Skrillex, who used vocal effects extensively throughout the song. Skrillex used auto-tune to create a robotic, heavily distorted vocal sound that helped to create an unforgettable atmosphere.

The Weeknd has become one of the biggest pop stars in the world. His 2020 single “Blinding Lights” is a perfect example of how technology is being used to create dynamic and innovative pop music. The track features a heavily distorted vocal effect that was created using auto-tune and analog synth effects. The result is a distinctive and unique sound that has helped propel The Weeknd to the top of the charts.

Technology has had a profound effect on music over the years. From auto-tune to drum machines, technology has enabled artists to explore and create new and exciting sounds. These nine tech-infused songs are some of the most iconic in music history and have had a tremendous impact on our culture. From Nelly to The Weeknd, these tracks have helped to shape the sound of modern music.