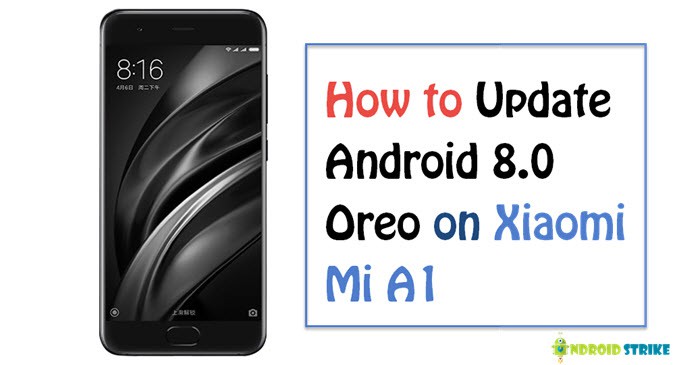 Update Xiaomi Mi A1 to Android 8.0 Oreo Manually: – Xiaomi has recently launched their brand new device Xiaomi Mi A1 into the competitive market. After the collaboration with Google, Xiaomi Mi A1 appears with Stock Android and also getting Android 8.0 oreo update. Today we are going to discuss how to update and install Android Oreo on Mi A1.

Xiaomi Mi A1 device has 5.5inch IPS display that has the resolution of 1080×1920 pixels. This smartphone comes with 4GB of RAM and 64GB of Internal Storage which is expandable up to 128GB using External Micro SD card. It carries Qualcomm Snapdragon 625 octa-core processor. Also, It has 12MP of the Rear camera and 5MP of Front Selfie shooter. As of now, the device is running on stock Android Nougat (v7.1.2). Now, we are going to update the Mi A1 phone to Android Oreo with an official update.

How To Update Xiaomi Mi A1 to Android 8.0 Oreo [Official update]: –

So, Finally, we entered the guide to Install Android oreo on Mi A1 Officially. Before moving to the guide, You need to follow some of the prerequisites.

Also Read: – How To Enable Android O Notification Dots On your Android Phone

Prerequisites before updating Xiaomi Mi A1 to Android 8.0: –

A recent update (13th Jan): –Xiaomi has stopped releasing the oreo update for the Mi A1 as the users are facing too much of problems like force close on dialer app, Battery drains quickly while turning ON the Bluetooth, Ambient light issue and few other similar problems. So, Xiaomi decided to stop sending the Oreo update for the users until they fix the bug. For Installed Oreo users will get a patch update and remaining of them will get a pure bug fixed Android Oreo. So, No need to worry about the firmware update as of now. Based on the recent news, Xiaomi has leaked that the issues will be solved and the Oreo updates will continue after the two weeks from today.

Last Updated (8th Dec)  (closed): – Xiaomi decided to launch Oreo update for their Mi A1 device. To do so, You have to follow the steps given below. Before moving to the Guide. You should remember that this Oreo update for Mi A1 is in the form of Beta Version. So, If you want to get Oreo update right now. You can install the Beta Version on your current Mi A1 device. But, Remember that you may face problems after the installation of Beta update due to bugs. The beta version is only for the testers. If you are ready to install Android Oreo Right now. Then, follow the process which is given below. Otherwise, Wait for the Stable ROM update which you will get this year end.

Note: – you have to submit the form before 11th Dec to get the beta update of Oreo on Mi A1.

Guide to install Oreo update on Mi A1 (Beta Process): – 4.  Now, You can able to see the form. You have to select your device Model, Country and the reason to get OREO Update on your device. 5. Click on submit button and Wait for few days. You will get the update via OTA manually. If you don’t know, how to download and install Oreo Update through OTA. Then, Follow the steps below.

Guide to Install and Update Xiaomi Mi A1 to Android 8.0 oreo Manually: –

Also Read: – How to Update and Install Android 8.0 Oreo on Moto G4 Plus [Quick Guide]

I Hope this guide helped you on How To Update Xiaomi Mi A1 to Android 8.0 Oreo. Now, You can experience the Stock Android Oreo on your Mi A1. So, what’s your doubt? Let me know in the comment section.

42 thoughts on “How To Update Xiaomi Mi A1 to Android 8.0 Oreo Manually”